Welcome to PartybusNightclub (“PBN”), the leading provider of party bus | club packages and best of nightlife in LA. Whether you’re trying to shake off a bad week or celebrate a great one; PBN provides the perfect night spot in LA to experience every occasion special events with a group of friends. Now anyone who is celebrating, hosting a Birthday or Bachelorette Party or wanting to go big can consider themselves “connected” in the nightlife scene and experience the VIP treatment once only available to the A-Listers. You’re Important. You know it, and so do we. That’s why we offer the best deals and rates for party bus club packages. Please give us a call 310-749-9029 to learn about your next great night out.
Join 53,415 other followers

Bachelorette packages are all inclusive party night. We have sourced and brought together the best in bachelorette party nightlife. Your last night as a single woman needs to be full of unabashed indulgence and whimsical surprises. We plan unforgettable parties. It’s what we do. Nightlife Made Easy! 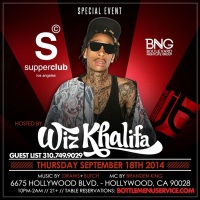 Supperclub Hollywood is the only LA nightclub that delivers bottle service in bed. With beds instead of tables, an all-white design, and hot bottle waitresses to match – it is always time to party inside Supperclub Hollywood. Make a bottle service reservation or get added to the guest list at (310) 749-9029. You will not want to be caught outside when this party is going off. Make sure to arrive early, dress to impress and be 21/over with ID. Experience bottle service in bed at L.A.’s top Hollywood nightclub, Supperclub, located at 6675 Hollywood Blvd in Los Angeles.

Who is Wiz Khalifa?

Cameron Jibril Thomaz (born September 8, 1987), better known by the stage name Wiz Khalifa, is an American rapper and singer-songwriter. He released his debut album, Show and Prove, in 2006, and signed to Warner Bros. Records in 2007. His Eurodance-influenced single, “Say Yeah”, received urban radio airplay, charting on the Rhythmic Top 40 and Hot Rap Tracks charts in 2008. Wiz Khalifa parted with Warner Bros. and released his second album, Deal or No Deal, in November 2009. He released the mixtape Kush and Orange Juice as a free download in April 2010; he then signed with Atlantic Records. He is also well known for his debut single for Atlantic, “Black and Yellow”, which peaked at number one on the Billboard Hot 100. His debut album for the label, Rolling Papers, was released on March 29, 2011. He followed that album with O.N.I.F.C. on December 4, 2012 which was backed by the singles “Work Hard, Play Hard” and “Remember You”.

What is Supperclub Los Angeles?

Supperclub Hollywood is where you want to start your weekend partying. And Supperclub LA nightclub bottle service is your best bet to make sure you are not waiting in a massive line. This place sells out every week, so you will want to reserve in advance. Prepare yourself for an evening of champagne showers, tight bodies, innocent debauchery and celebrity infested nightlife on any and every Thursday night at Supperclub Hollywood nightclub.

When your day to day routine gets stale, always remember life is too serious…be a little dangerous…discover the glitz and glamour red carpet VIP available online at www.bottlemenuservice.com